If you’re a West Ender, you’ll be used to walking past beautiful buildings on a daily basis. Oran Mor at the top of the street is hard to miss, but did you know the history of these 5 Byres Road landmarks?

Kelvinside Hillhead Parish Church
Modelled on the Sainte-Chapelle in Paris, this beautiful church was designed by James Seller and completed in 1876. It was built to accommodate the growing population of Hillhead, which had expanded rapidly after the University of Glasgow relocated here some years before. One of the church’s most distinguished features are the six stained glass windows, which were recently restored. 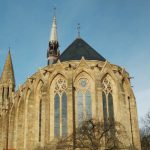 Hillhead Book Club
Formerly known as the Salon Picture House, this building was used as a cinema between 1913 and 1992. While attempts were made to keep the picture house open (Sean Connery being a keen supporter), the cinema was later converted into a restaurant. Many of its original features remain and can be seen from within the venue, now a popular bar. 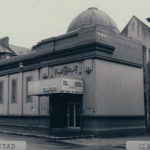 THE SALON PICTURE HOUSE IN 1979. PHOTO BY LENGAZZARD/CINEMA TREASURES

Western Baths
A private swimming and leisure club founded in 1876, the baths lay derelict for a numbers of years, before being restored a few decades ago. Today, it’s an active sports club that, apart from the swimming pool, also offers numerous exercise classes. 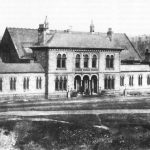 WESTERN BATHS IN ITS EARLY DAYS. PHOTO FROM WWW.THEWESTERNBATHS.CO.UK

Botanic Gardens Garage
Possibly the oldest surviving public garage in the U.K., this charming Art Deco-style building with a distinctive facade of green and white glazed terracotta tiles was built in 1912. The building was saved from demolition in 2007, after successful campaigning from local groups. At the moment, the building is empty, but there are plans to find new use for the building, while keeping the original features.

THE BOTANIC GARDENS GARAGE IN MODERN DAYS. PHOTO FROM THE DOG & DECO WEBSITE, A SITE FOR FANS OF DOGS AND ART DECO BUILDINGS!

Curler’s Rest
Curlers got its name from Partick Curling Club, who used to practise nearby. It is the oldest building on the street and has been a pub since the 1850’s, making it one of Glasgow’s longest surviving drinking establishments. 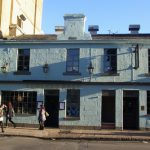 CURLERS IN 2010. PHOTO BY ADAM BRUDENER