Byres Road’s favourite (and only) cheesemonger was started by  a former chef embarking on a new career path. It turned out to be a successful choice, as the business has won several national awards since opening in 2010. A wide selection of cheese is on display to eye up, smell and sometimes even taste; and if you find the selection overwhelming, the knowledgeable staff are happy to advise. A second shop opened in Edinburgh last year, bringing George Mewes Cheese across to the East Coast. 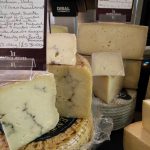 THE PECORINO TARTUFO IS ONE OF THE CURRENT BESTSELLERS.

George Mewes Cheese specialises in British and continental cheese, most of which isn’t sold in supermarkets. Instead, the artisan and farmhouse cheese gives the shop an opportunity to buy directly from small suppliers, particularly here in Scotland. Having developed close relationships with many suppliers, the shop sometimes offers impromptu “Meet the cheesemaker” sessions. For customers, getting to meet the producers in person makes the purchase a special experience.

The cheesemonger hasn’t just made a name for itself locally, but is visited by many tourists.  The Wee Food Tour includes the shop as one of their stops, and the double decker sightseeing bus has started pointing it out on its way down Byres Road. Cheese has become a Scottish product, not unlike whisky. Still, it’s not just cheese luring customers into the shop; many come to purchase Chrystal’s Handmade Scottish Shortbread, which is  available in only a few select locations.

The manager of the Glasgow shop, Steven, has only grown his passion for cheese since starting in George Mewes Cheese in 2011. Recently, he has formed his own gastronomic events company, finding inventive ways of tasting cheese. The next event, where George Mewes cheese is paired with Gin, will be held at Hotel du Vin in March. Many more events are in the pipeline, and are sure to delight West End cheese fans.

George Mewes Cheese can be found at 106 Byres Road. If you’d like to attend one of Glasgow Gourmands’ cheese tastings, tickets are available in the shop.