Alasdair Gray is one of Scotland’s most beloved writers and artist, and has been a resident of the West End since the late 60s. A well-known face in the area, Gray has made his mark on Byres Road by creating public art in several buildings, including Oran Mor, Ubiquitous Chip, Hillhead Subway Station and The Western Baths Club.

Ubiquitous Chip
Alasdair Gray’s work can be found in three different places in the restaurant. A favourite with many is a mural on the staircase between The Wee Pub and The Brasserie, depicting West End characters in every day life. Many faces in the mural belong to staff and friends, including original owner Ronnie Clydesdale.  They were all painted around the time when the restaurant first opened forty years ago, with Gray painting the murals in return for food and drink. 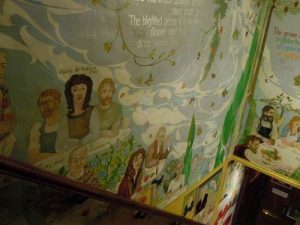 Oran Mor
When Colin Beattie decided to turn an abandoned church into a pub and a creative centre, he asked his friend Alasdair Gray to create a mural. With the help of several other artists, he was given free range to decorate the ceiling in The Auditorium. The result is an incredible night sky, inspired by the signs of the Zodiac.

More than ten years later, Gray still comes back to continue his work. It is one of the largest pieces of public art in Scotland, and has won many fans. Amy Winehouse, who performed in the Oran Mor in 2006, described The Auditorium as one of the most beautiful rooms she’d ever seen. 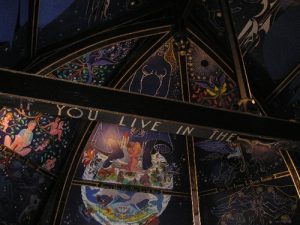 Hillhead Subway Station
When entering the subway station, visitors are met by a two-metre-high, twelve-metre-wide mural of the West End. It’s the first public art piece in the Glasgow underground, and was commissioned to commemorate the modernisation of the underground network.  A collaboration between Alasdair Gray and Nichol Wheatley, the scene is based on a mural by Wheatley that once decorated the inside of Grosvenor Café (now Vodka Wodka). The Hillhead street scene is framed by ‘folks of all kinds’: unicorns, birds of paradise, owls and devils, just to mention some.

The Western Baths
In 2013, Gray finished his artist residency at the Western Baths, a private swimming and leisure club dating back to 1876. During his residency, Gray created a seven by seven feet mosaic. The artwork features more than sixty separate tiles and reads: ‘Refresh Mind, Refresh Body, Refresh Land and Refresh Love.’ The octagon-shaped piece features images of men, women and children and has a prime position just at the entrance of the club.

All of these artworks can generally be seen by the public; however, bear in mind that Oran Mor, Ubiquitous Chip and The Western Baths are operating businesses and you may not be allowed in certain areas at all times.