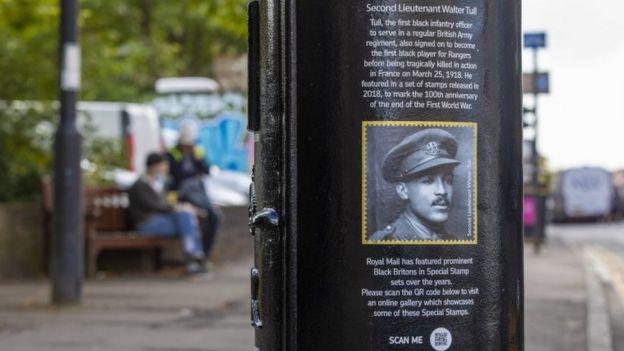 “THE Post Office has repainted some of its landmark red post boxes black to celebrate black Britons past and present.

Those honoured include the first black man to play for Rangers, Walter Tull, Sir Lenny Henry and nursing pioneer Mary Seacole. Walter is commemorated with a black post box on Byres Road.

He featured in a set of stamps released in 2018 to mark the centenary of the end of the First World War, and was also the first black Army officer to command troops in a regular unit.

He was tragically killed in action during the war.

Royal Mail said that four postboxes – in London, Glasgow, Cardiff and Belfast – have been painted black with gold trim as part of Black History Month in October.

Each of the special edition postboxes has a social media link and features a significant figure in the British black community.

Peter De Norville, Royal Mail’s head of diversity and inclusion, said: “Black History Month is a great opportunity to celebrate the contributions that black people have made to this country over many generations.”

Read the full article by By Hamish Morrison on Glasgow Evening Times website.