The birthplace of the West End

The area around Byres Road has been known since the Middle Ages, when the Bishops of Glasgow travelled through “the Byres of Patrick” to reach their summer residence at Partick Castle. It later turned into a parish road connecting Partick with the mills of Kirklee. The Dowanhill Estate, to the west of Byres Road, was one of the first developments in the area and came to be a dominant feature of the West End. It was built by James Buchanan, who also played a minor role in the construction of Great Western Road and the widening of Byres Road in the 1830’s. James Gibson of Hillhead can be credited as the instigator of these works, resulting in the West End becoming much more accessible from the city.

From this time onward, the West End grew rapidly, and by the late 1860’s, Hillhead’s population had increased from just a few hundred to over 3,000. This large growth led to difficulties in administrating the area, as there was no local authority in place. Soon, the Burgh of Hillhead was founded, incorporating the area between Byres Road and River Kelvin. The Hillhead Burgh Hall was built, standing on the site that is now Hillhead Library. The building was used as administration headquarters and housed meeting rooms, a public hall and police and fire services.

The Hillhead Burgh remained until 1891, when it was officially incorporated into the city of Glasgow. 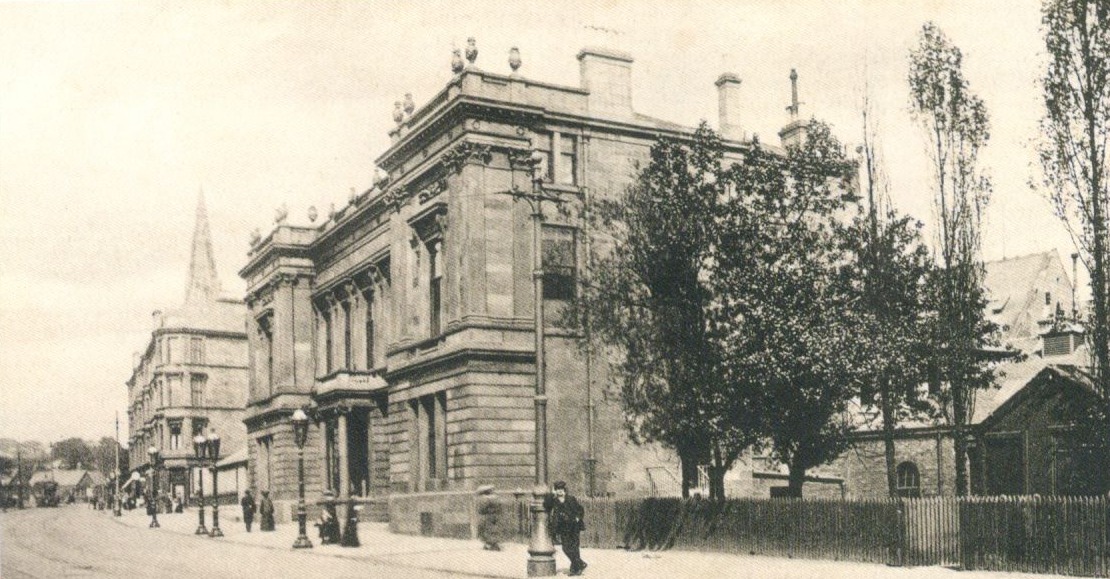 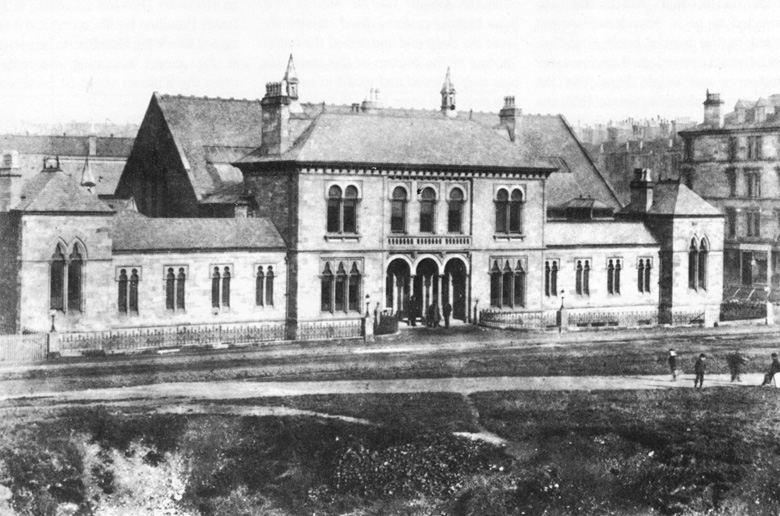 The Western Baths Club. Photo used with permission from www.thewesternbaths.co.uk

The tenements and shops on Byres Road first started appearing in 1870. This was the same year as the University of Glasgow relocated its campus to Gilmorehill, and it can probably be assumed that the influx of staff and students would have contributed to increasing trade in the area. One of the oldest shops that still exists is The University Cafe, praised by The Independent as one of Britain’s top student eateries.

Many of Byres Road’s most interesting buildings can be found on its side streets. Today’s Hillhead Bookclub was once the Salon Picture House, operating from 1913 to 1992*. Attempts were made to keep it going as a working cinema, with support from the likes of Sean Connery. Unfortunately, this did not happen; however, The Hillhead Bookclub has established itself as a popular destination for young people in the West End and many of the original features remain.

The Curlers public house (today’s Curler’s Rest, next to Hillhead Subway Station) is the oldest remaining building on the Byres Road. Its name comes from its association with Partick Curling Club, whose members used to come here for a drink after practices. The nearby Baptist Church and Western Baths are of equal historical interest, the latter being one of the oldest indoor baths in Scotland.

While younger than Byres Road, the lanes around the main street have an interesting history.

Ruthven Lane, now a popular destination filled with eclectic shops and restaurants, was developed from garages and lock ups dating back to the 1920s. The lane has been threatened by redevelopments, but remains a favourite haunt for vintage, comic books and yoga lovers alike. Here you’ll also find the remnant of Byres Road’s past as farmland – a farmhouse from 1870 which has been converted into the popular restaurant The Bothy.

Across the street is Ashton Lane, the host of a thriving nightlife scene that many would describe as the essence of Byres Road. 40 years ago, this was far from the case. When Ubiquitous Chip first moved into its current venue (a former undertaker’s stable) in 1976, Ashton Lane was run down and consisted of residential housing and empty shops***. Soon, other businesses followed, creating a lively cafe culture. The Grosvenor Cinema changed its entrance to the lane, having previously faced Byres Road directly. What was previously a derelict lane turned into a popular destination, attracting visitors from all over Glasgow.

Much has happened to Byres Road over the years. Now considered one of the main destinations for dining, drinking and shopping in Glasgow, this is far from its humble beginnings as a countryside thoroughfare. The area has attracted some large employers over the years (University of Glasgow, BBC, the Western Infirmary), helping this development. Known as the heart and soul of the West End, Byres Road is a favourite among both Glaswegians and visitors.

* Read more about the Salon cinema.

** Learn about the Western Baths

Thanks to Gordon R. Urquhart and Friends of Glasgow West for letting us use the information provided in the excellent Hillhead and Dowanhill Heritage Trail maps. These maps are available free of charge at the Hillhead Library. For further reading, we recommend the title Along Great Western Road by Gordon R. Urquhart, available at Waterstone’s Byres Road. 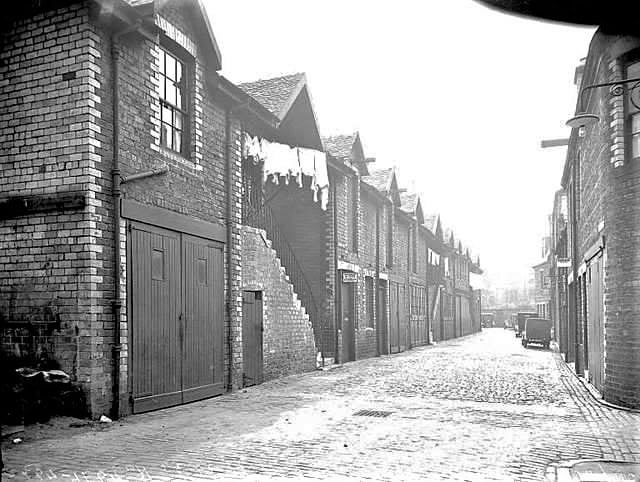 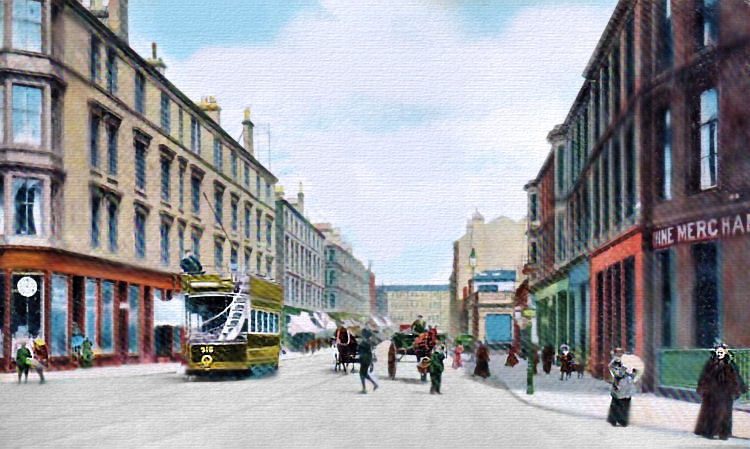 Byres road street scene at the turn of the 19th century. Used with permission from Scotcities 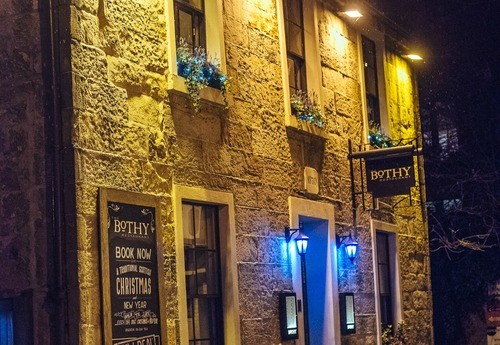 The Bothy as it looks today. Photo used with permission from the restaurant.