From all the corners of the world

A wander around the West End can feel almost like a journey around the world. Thanks to a culturally diverse population, the West End attracts a variety of international kitchens, treating you to everything from Belgian to Vietnamese cuisine. The next time you’re out on Byres Road, give your taste buds a new experience by visiting one of these tasty eateries.

California/Mexico
Hopping across to the west coast of the US, you’ll find a whole new style of street food originating in Mexico. The first of its kind in Glasgow, Taco Mazama was founded by a Scottish student who had spent a summer sampling burritos in Southern California. Since opening on Renfield Street in 2009, the successful restaurant has spread to several locations in Glasgow – including Byres Road.

South-East Asia
Heading around the globe to South-East Asia, you won’t be spoilt for choice. Bar Soba (116-122 Byres Road) serves pan-Asian dishes, blending flavours from Japan to Singapore, and everywhere in between. Their Asian fusion has been so successful that they’ve opened branches in Edinburgh and Leeds in addition to their three Glasgow locations.

If you fancy something different, The Hanoi Bike Shop (8 Ruthven Lane) is Glasgow’s only Vietnamese restaurant and has attracted the attention of the likes of Beyoncé. The Sunday afternoon meal known as yum cha is a favourite with locals, and involves a selection of dumplings, steamed buns and tea cocktails. 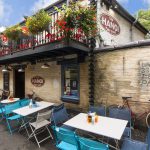 THE HANOI BIKE SHOP IN RUTHVEN LANE. PHOTO BY THE RESTAURANT

China
Byres Road is home to three Chinese restaurants, all of which offer take away. Amber (130-132 Byres Road), Chow (98 Byres Road) and Home Wok (101 Byres Road) are located within a few hundred metres from one another, offering a little piece of China right here in the West End.

India
Most Glaswegians consider Indian cuisine as much part of Scottish food culture as any chippy down the road. This is evident from the invention of dishes such as haggis pakora and venison curry, both of which can be found in Masala Twist (192-194 Byres Road). Another West End restaurant, Ashoka (19 Ashton Lane), is popular with lunch time eaters, serving “lunch on the run” for a good price. 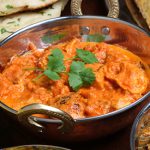 ALL THE FLAVOURS OF INDIA. PHOTO BY MASALA TWIST.

Andalucía
With mouth-watering tapas served in an atmospheric environment, Café Andaluz (2 Cresswell Lane) has been called “the best Spanish restaurant in Glasgow” by several ex-pat reviewers. Ideally enjoyed with a glass of sherry or red wine, Andalusian cuisine has a focus on seafood, but also includes Spanish favourites such as chorizo.

Belgium
Belgian-themed Bar Brel (39 Ashton Lane) is one of the most popular places in Ashton Lane, and people from all over Glasgow come to indulge in their moules frites. Also famous for their Belgian beer menu, Brel attracts beer connoisseurs en masse. 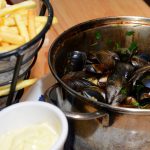 Scotland
Sometimes home is simply best. The West End is host to two of Glasgow’s top Scottish restaurants, Ubiquitous Chip (12 Ashton Lane) and The Bothy (11 Ruthven Lane). Both are tucked away in the narrow lanes around Byres Road, providing an intimate dining experience.

Not to be forgotten is the more traditional indulgence of fish and chips. Old Salty’s (337 Byres Road) offers traditional food in a modern environment, whereas Mario’s Plaice (285-287 Byres Road) and The University Café (87 Byres Road) serve a more typical fish supper. The latter has been serving food on Byres Road since 1918, and remains one of the oldest businesses on the street.