Meet the Faces of Byres Road

Thank you to The Skinny magazine for your article Meet the Faces of Byres Road featuring lovely people in our West End community including:

Meet the Faces of Byres Road with Ace & Tate

Ahead of Dutch eyewear specialist Ace & Tate opening its new shop on Byres Road – the brand’s first in Scotland – we meet some of the people they’ll be joining in the bustling community of Glasgow’s West End.

Glasgow is innately cool, but there’s always a new neighbourhood trying to market itself as No Mean City’s most happening part of town. Areas as culturally and geographically diverse as Finnieston, Denniston and Shawlands have all tried to lay claim to the title of ‘Glasgow’s hippest destination’ in recent years, but Byres Road remains the daddy. The beating heart of the city’s bustling West End, its eclectic mix of independent shops, bars and restaurants has been drawing Glaswegians west for decades, while its proximity to Glasgow University means that each year a new set of young dreamers brings new vibrancy to the thoroughfare.

Soon to join this throng is Ace & Tate, the eyewear specialist with glasses for every side of you. Eye tests at Ace & Tate are free, and the brand’s stylish frames and premium lenses start at £98. And if you need your frames pronto, a same-day-service allows you to collect prescription opticals and sunnies within just a few hours. A champion of originality and people with multifaceted personalities, Ace & Tate should find both in spades on Byres Road. As well as launching a shop in Glasgow – its first north of the border – Ace & Tate is also celebrating optimism this spring. With this in mind, The Skinny took a stroll down Byres Road to meet some members of this warm and welcoming West End community.

At the top of Byres Road stands Òran Mór, a beautiful old church that’s been converted into one of Glasgow’s liveliest venues. On a crisp, bright morning, we meet venue manager Creon Brock, who’s got a hectic few weeks ahead. “Coming up in the calendar we’ve 35 shows happening over 36 nights,” he tells us. “But that’s why it’s great working here: each day is different.”

Creon began working at Òran Mór in 2006 while he was a student, and 13 years later he’s gone from weekend shifts in the club downstairs to helping book and run the venue’s events. He tells us a big perk of his job is being at the heart of the West End community. “There’s always been that feeling here, certainly with our Play, A Pie and A Pint performances throughout the day; there are a lot of regulars who come along every week.” There are other benefits too, such as having one of the best shopping streets in the city at your disposal. “I do love nipping down to Fopp on my lunch break,” beams Creon, “so I was over the moon when it opened again.”

Creon is referring to the recent closure of Byres Road’s iconic original branch of Fopp after the chain was purchased by Canadian firm Sunrise Records. But locals who see the shop as a vital part of the West End’s music scene protested the closure, and as a result Fopp has risen again, phoenix-like. “It was a bit mad here for a while, but it’s nice to come back, especially after how supportive people in the area have been,” says Emma Gray when we pop in to find the much-loved record store back in full flow. 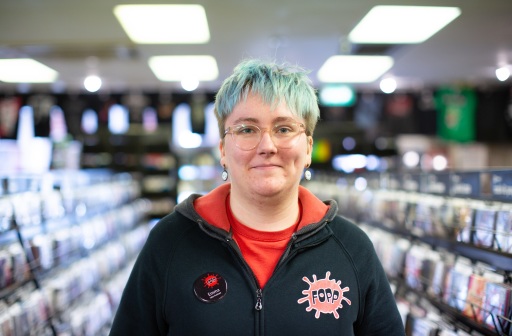 The local support was overwhelming (Mogwai’s Stuart Braithwaite and comic book writer Mark Millar were particularly vocal). Part of the reason for this outcry is the personal connection people get from Fopp’s staff. “With some customers, I know all about what’s going on in their private lives,” says Emma. “I don’t know if they get that personal connection shopping in town. I’ve not really had it in other retail jobs, so I think it’s pretty specific to this area.”

Another music institution on Byres Road that’s not going anywhere soon is Oxfam Music. “As much as we’re here to make money for Oxfam, we’re also here to give people somewhere they can talk enthusiastically about music,” says assistant manager Lisa Jones. “They can discover new things here, take a chance on new music, and it’s great socially for the volunteers and for people in the community.”

Having worked there for only four months, Paul Johnson is relatively new to Oxfam Music’s team, but he lives just around the corner and has been frequenting the shop for years. “It’s always been an interesting part of my life,” he tells us. “I’ve friends who’ve worked here a long time as volunteers and I knew how much they got out of it; I guess I just wanted to be part of that.” 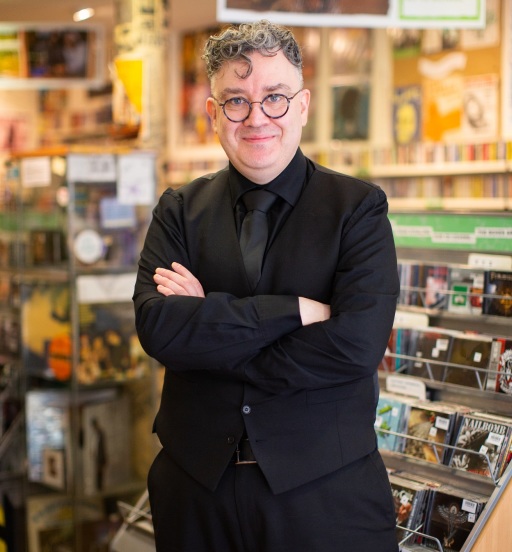 Paul reckons you’d struggle to find a more clued-up staff. “I think between all of us, we’re pretty encyclopedic, and working here gives us the chance to spend all day sharing our passion for music with people. In the age of everything being available online, that’s one of our key selling points: that customer relationship.”

“The way the shop intersects with the local music scene is really nice as well,” adds Lisa. “We’ve had gigs played in the store before, we have people donating things in the shop who are musicians in the area, and it’s really nice to have that overlap. Glasgow’s such a great city with an active music scene, and we’re just happy to be a part of that in a way that raises money for a good cause.” 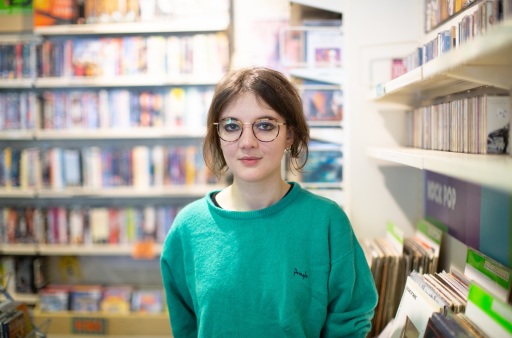 Off Byres Road, you’ll find a scattering of independent traders in the tributary lanes and alleyways that splinter off from the main strip. Down the wonky cobbles of Ruthven Lane, in a grey stone building that once served as a cowshed, there’s menswear store W2. Business student Jonny Canning works there part-time. “I would describe Byres Road as quite diverse,” the 23-year-old tells us. “You have places like Kimchi Cult, which is so different from somewhere like the Ubiquitous Chip, so it’s a really nice melting pot of different ideas and people.

“Welcoming would be the word I’d use to sum up the area; I never feel uncomfortable around here.” 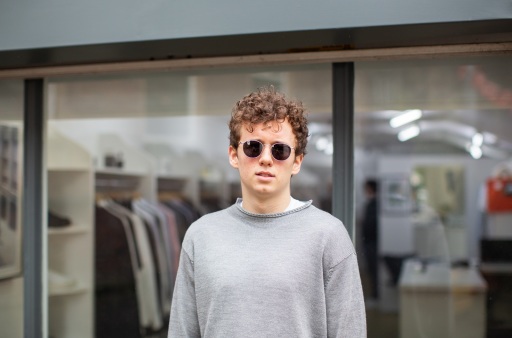 Jonny tells us that his favourite thing about working in this part of town is simply the atmosphere. “I just enjoy coming in here. While it’s work, it’s getting to see friends and it’s getting to chat to people about something I enjoy.” He also gets a kick out of seeing people returning to the store. “People are always popping their heads in to have a look and see what we’ve got in that’s new. We get a good mix of students but also older people who maybe when they were younger were really into fashion and still like to look sharp. It’s maybe more difficult for them to find places on the high street that will cater for them as well, but we do that here.”

Across from W2 you’ll find charming Vietnamese restaurant The Hanoi Bike Shop, where 20-year-old Sydney student Molly McBain has been working for the last six months during her gap year. “There is a good sense of community here,” Molly says of the West End. “And I love how on the same street you have some world famous restaurants, but you’ve also got smaller cafes and independent places – everything you would need.” 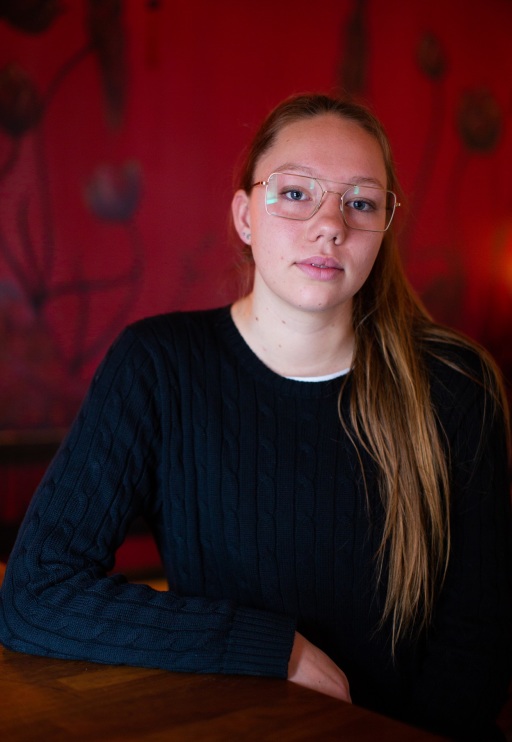 When Molly returns to Sydney to study architecture, she’ll be taking with her a love of the West End’s buildings. “I come from a suburban area of Sydney, so even just the outsides of the flats around here I find quite fascinating. I love all the different types of sandstone on all the tenement flats.”

In her short time in Scotland, Molly’s done quite a bit of travelling around, but she’s not found anywhere quite like the neighbourhood she’s called home for the last six months. “Byres Road is definitely one of the most vibrant places I’ve found on my travels.”

On the other side of Byres Road you’ll find Cresswell Lane and a small community of boutique shops in the De Courcy’s Arcade. One of the newer members to this tight knit community of independent shops is Lovesome Emporium.

Almost everything in Lovesome – including chunky knit blankets, knitted scarves and handmade lampshades – is crafted by owner Wendy Rae, who opened the store last summer. “I like the vibe here in the West End,” she says. “We’ve a lot of regular customers and the other shops in De Courcy’s are really supportive of one another; we’re like a wee family up here.” 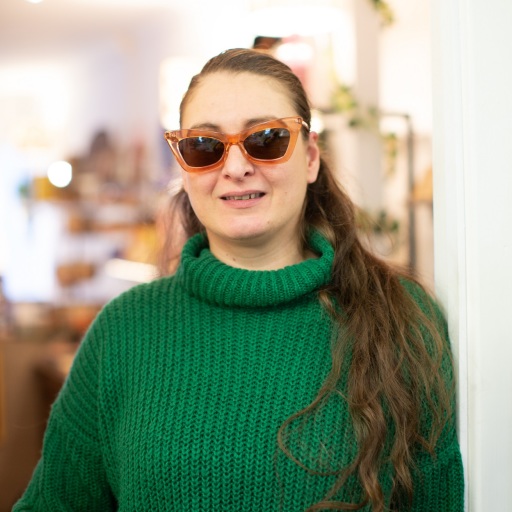 That sense of community stretches out into the West End as a whole. “There’s always a lot of community activity going on,” she says. “I walked past the Hillhead Library the other week and there were folk doing Tai Chi in the window, and there are a lot of nice things like that. This is the right place for me and the shop.”