It’s only been three months since Nana Momo Makes opened up in Ruthven Lane. Their story, however, goes back almost three years, when they started taking stalls in different markets around Glasgow. Far from an overnight success story, the mother-daughter team has built up a loyal customer following, attracted by their colourful fabrics and clever designs. Like many of the traders in the lanes of Byres Road, Nana Momo Makes has created a unique style that no one else can quite match. 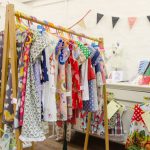 It started off with a mother and daughter outing. Cara Keenan was on maternity leave, wanting to try something new, so she asked her mother to join her for a sewing class. Cara’s mum, Morag, had been sewing when her kids were young, and she liked the idea of taking it up again. They found themselves enjoying the class, but instead of sewing items for herself, Cara started developing ideas of her own: children’s clothing.

After the class had finished, Cara and Morag made a few dresses that they gave to friends with children. Although they had to share a sewing machine, they got so much positive feedback that it encouraged them to think bigger. They started signing up for markets, initially selling little or nothing at all, but were helped by other vendors, who became their friends, giving them tips on how to move their business forward. In spite of this encouragement, Cara and Morag often went home feeling “a bit deflated”. It took time, and many more market days, before they started making a name for themselves.

As locals will know, Glasgow’s weather is always an uncertain element, and after a particularly wet summer, Cara and Morag started thinking about opening a shop where they could work and sell their children’s clothes. For them, the West End was the ideal place to do this. They find that the people here identify with Nana Momo Makes, and it’s the West End markets that have worked best for them. Soon they started looking around, thinking about what they needed, and what they could realistically afford. A property in Ruthven Lane became available, next to a comic book shop and opposite an antiques dealer. While the venue was small, Cara could see its potential and managed to convince her mother, whom she describes as “the sensible one”. With the help of friends, Cara and Morag got the shop done up and ready for a grand opening in October last year. 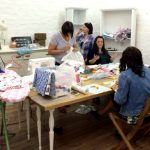 CARA AND HER FRIENDS GETTING READY TO OPEN THE SHOP. PHOTO BY CARA KEENAN

Cara says that she enjoys being part of the quirky atmosphere in Ruthven Lane. It’s more affordable than a city centre location, and the traders look out for each other in many ways. She and Morag also continue to re-visit their favourite markets, which they do as much because they enjoy the atmosphere as to sell their clothes. They’ve also started an online shop, where customers can custom-make designs in the same way as somebody visiting the store. Cara wants the customer to get a personal service and walk away with just the outfit they wanted, and she is happy to sew up clothes in the fabric and style that the customer wants. She finds that being a mother helps; she knows what works for her own children, and can give sound advice to her customers.

New ideas are often born from chatting to customers, or simply by trying to figure out what to do with leftover fabric. Just before Christmas, Cara ran her first sewing class, and she was delighted to see how much her “students” enjoyed the class, one of whom even bought her own sewing machine. 2016 has started off well, and Cara and Morag have just embarked on a whole series of sewing classes in the shop, some of which are already full. Having reached her goal of having her own shop, Cara wants to keep developing new ideas for Nana Momo Makes and hopes that eventually she will be able to give up her day job and work with what she loves full-time. 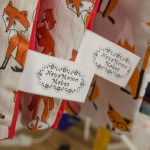