Season premiere for A Play, A Pie and A Pint

A Play, A Pie and A Pint has just begun its 24th season at Oran Mor. As one of the first to introduce lunchtime theatre in Scotland, this popular venue has put on over 380 plays and continues to surprise and delight, with loyal audience members returning week after week.

Lunchtime theatre has existed since the 1960s, and typically takes the form of a short play accompanied by a bite to eat. A Play, A Pie and A Pint is the result of a chance meeting between Colin Beattie and David MacLennan in 2004. Beattie, the owner of Oran Mor, was renovating the old church at the time, and wanted his pub to become a creative hub. MacLennan, a well-known person in the theatre world, suggested lunchtime theatre, which he had encountered in other cities. Beattie liked his idea, and 12 years later on, A Play, A Pie and A Pint is more popular than ever.

I spoke to associate producer Sarah MacFarlane about the success of A Play, A Pie and A Pint, and their plans for the upcoming season. The programme consists of 19 plays, one for each week. Whereas some are written by well-known writers such as Peter Arnott, others are new playwrights who see their works performed for the very first time. 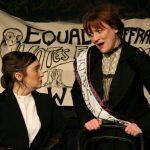 CAUSEWAY, THE FIRST PLAY OF THE NEW SEASON. PHOTO BY LESLIE BLACK, USED WITH PERMISSION FROM ORAN MOR

A Play, A Pie and A Pint’s ability to mix established writers with budding dramatists is one of the reasons why the Oran Mor has been so successful in delivering lunchtime theatre. The aim is to create a varied programme and give opportunity for new writers to have their work produced. Several now well-known writers started out here, and some productions have moved on to become touring plays. To this day, A Play, A Pie and A Pint still accepts scripts through open submissions, and the first play of the year, Causeway by Victoria Bianchi, is the result of this.

Over the years, lunchtime theatre at Oran Mor has developed a loyal following, and Sarah tells us about audience members who come back week after week, without even reading the programme in advance. The audience is usually varied, consisting of tourists, students, industry people as well as those who are retired. For others, a visit to A Play, A Pie and A Pint is an opportunity to get out of the office and enjoy an extended lunch. 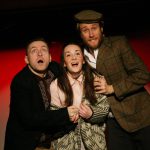 HOORAY FOR ALL KINDS OF THINGS. PHOTO BY LESLIE BLACK, USED WITH PERMISSION FROM ORAN MOR

A Play, A Pie and A Pint runs until 4th June, with a special programme for the summer currently being developed. Plays are performed Monday to Saturday, with prices ranging from £10-£14. Visit their website for more information on the programme and how to book tickets.