Run alongside the West End Festival, The Cottier Chamber Project has been bringing professional chamber music to West End since 2011. The programme, which includes jazz and folk, also introduced a dance programme two years ago. A long-time sponsor of the project is Byres Road’s own Currie & Quirk, who also acts as a box office. 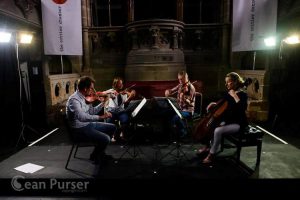 THE GLASGOW STRING QUARTET IS PERFORMING ON 6TH JUNE IN THE UNIVERSITY OF GLASGOW MEMORIAL CHAPEL. PHOTO BY SEAN PURSER/THE COTTIER CHAMBER PROJECT.

Premiering last Friday with a piece written by recent University of Glasgow graduate Olivia Calder, the Cottier Chamber Project will be hosting more than fifty performances, films and talks over the next few weeks. In addition to Cottier’s, many performances are held in well-known West End venues such as the Hunterian Museum, the University Chapel and the Cloisters. The Grosvenor Cinema in Ashton Lane is also hosting a film series each Saturday throughout the festival.

A new venue for this year is St Simon’s Church at Partick Cross, who are hosting a series of free lunch time concerts, ‘bite sized baroque’. For the chamber music novice, the 45 minute performances provide an excellent introduction to this type of music. While many performers are Glasgow-based, the festival has also invited a number of international guests. On 16th June, the Normandie-based string group Ensemble Magnétis will be making their first ever UK appearance. Alliance Française has partnered up with the festival for this performance, and are also delivering a series of lunch time talks on the topic of cultural and artistic exchanges. 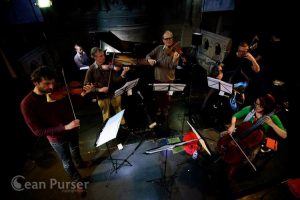 MR MCFALL’S CHAMBER. PHOTO BY SEAN PURSER/THE COTTIER CHAMBER PROJECT
One of this year’s highlights is a concert by Nick Lauener (piano) and Adam Wilson (organ), both recent graduates at the university. A collaboration with the Glasgow Science Festival, the artists will be performing music by composers who all had synesthesia. Each of them associated pitch and harmony with colour, and in this University Chapel performance, the music will be accompanied by a light show.

The Cottier Chamber Project runs until 25th June. For the full programme, go to their website. If you miss out on a performance, there is still an opportunity to catch them on the radio. BBC 3 will be recording a number of concerts, and are expected to air them at the end of next month.