The plaice to be

A fish-shaped hole on Byres Road has been filled. When Bernard Corrigan closed its Byres Road branch in March, many West Enders were sad to see it go. However, as of 10th May, Byres Road once again has a fishmonger amongst us, complementing the existing butcher, deli and many other specialty shops.

The Fish Plaice is a well-known Glasgow institution, having traded at Glasgow Cross for more than four decades. A favourite with locals and famous for its seafood as well as Scottish game, the Fish Plaice also operates a pop-up bar and kitchen, established during the Commonwealth Games in 2014. 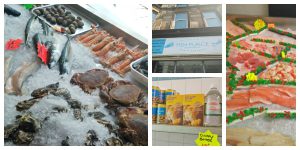 THE FISH PLAICE WEST END CAN BE VISITED AT 188 BYRES ROAD.

The new Fish Plaice West End stocks the finest and freshest fish, shellfish and poultry and promises to deliver the same great atmosphere and character that has kept its sister shop going for so long. We look forward to having a fishmonger on Byres Road once again, and wish it the best of success.